OLIVER DESIGN ACHIEVES A MILESTONE IN ITS 30-YEAR CAREER, DELIVERING FOUR MAJOR PROJECTS IN THE FIRST FOUR MONTHS OF 2021 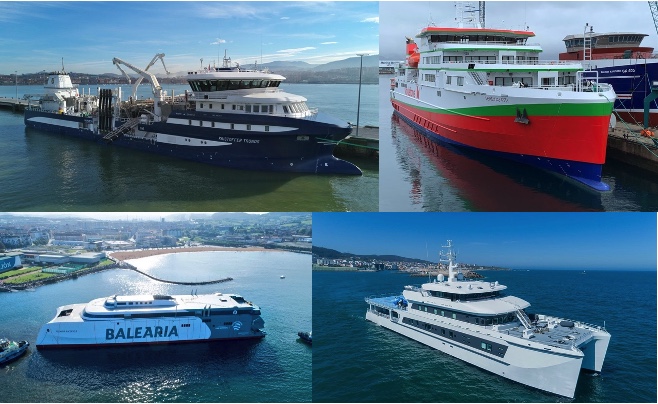 Clockwise from top left: the “Kristoffer Tronds”, the “Terevau Piti”, the “Wayfinder” and the “Eleanor Roosevelt”.

Oliver Design, a Spanish firm specializing in naval design and architecture, has achieved a milestone in its 30 years’ career, delivering no fewer than four major ship design projects between January and April 2021. Although the four vessels vary greatly in type, each will be outstanding in its own sector, encompassing the fishing, passenger transport, and super-luxury markets. All four are either operating or about to come into service in such a wide variety of settings as the Norwegian fjords, the South Pacific and the Mediterranean.

Between January and April, the Spanish company completed design and interior outfitting of a state-of-the-art fishing vessel, two ferries –one for Baleària and the other for French Polynesia– and an auxiliary vessel for a super-luxury yacht. The vessels were built in various shipyards on the Bay of Biscay: Vigo (Pontevedra), Burela (Lugo), Gijón (Asturias) and Erandio (Biscay).

With these contracts, the firm has seen more business than at any point since its foundation in 1990 by naval engineer Jaime Oliver – and all this in 2020, a year marked by the impact of the coronavirus pandemic. Together, the four projects required a total of nearly 95,000 hours’ work, mostly concentrated in the second half of the year.

The first of the four contracts was signed with Astilleros de Murueta, and was carried out at the shipyard in Erandio, on the right bank of the Nervión estuary, near the city of Bilbao. Oliver Design’s contribution consisted of design and outfitting of the interior of the “Kristoffer Tronds”, a latest-generation fishing vessel commissioned by Norwegian shipowner Alsaker.

The most striking feature of the vessel is that it is designed to transport live salmon, from the fish farms where they are raised on the Norwegian fjords to processing plants in a range of Northern European countries. It is fitted with four wells, with a total capacity for 5,000 cubic metres of water, and equipment for loading and unloading 800 tonnes of fish per hour. The vessel was handed over at the end of January and is now operating out of its new home port of Haugesund (Norway). 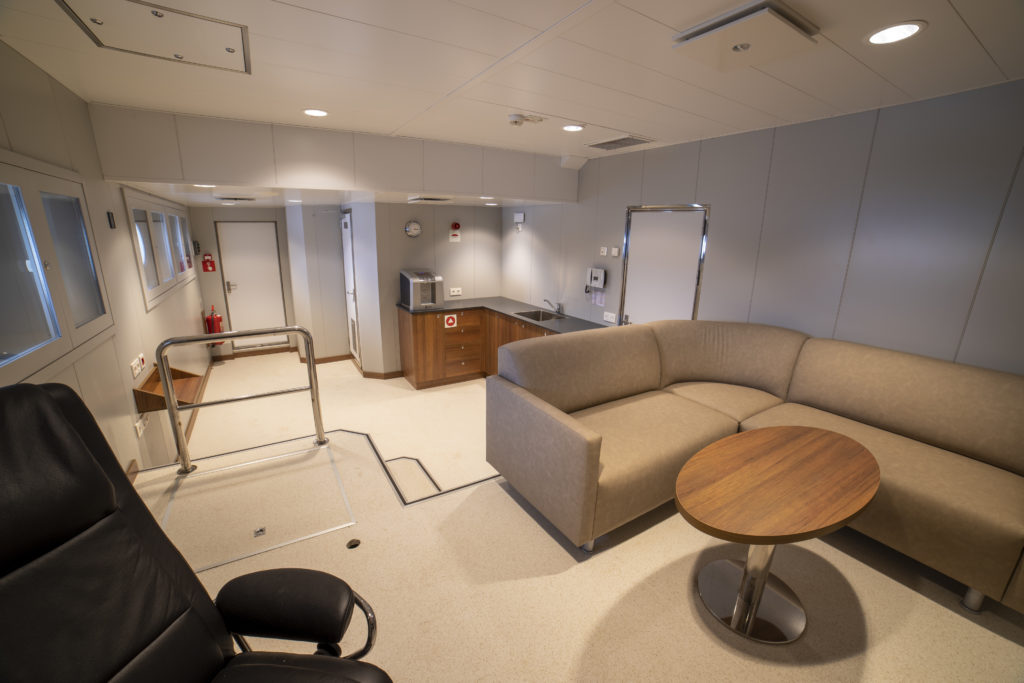 The “Kristoffer Tronds” is 90 meters in length by 18 in the beam. It has a crew of twenty under the command of two officers. Oliver Design’s work, undertaken between December 2019 and January 2021 consisted of fitting out 1,000 square metres of spaces on different decks, including the bridge, engine control room, offices, a meeting room, a veterinary laboratory and the crew’s quarters (including cabins, changing rooms, gym, laundry, galley, mess and lounge, among others). 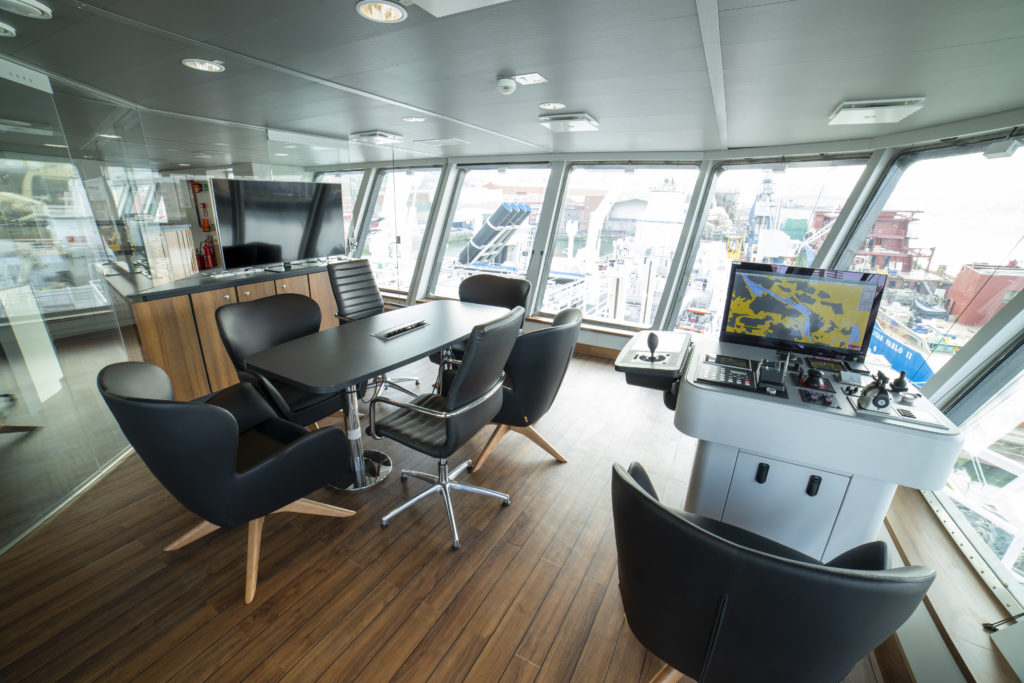 The second of the four contracts recently delivered by the Spanish naval design and architecture firm consisted of fitting out a shadow boat — a new type of vessel designed to provide support to a super luxury yacht. The “Wayfinder”, a spectacular 67 x 14 metre catamaran with an aluminium hull, was built at the Astilleros Armón shipyard in Burela (Lugo, in the Galicia region). The identity of its mother ship has not been revealed, but the owner is known to one of the world’s wealthiest individuals. 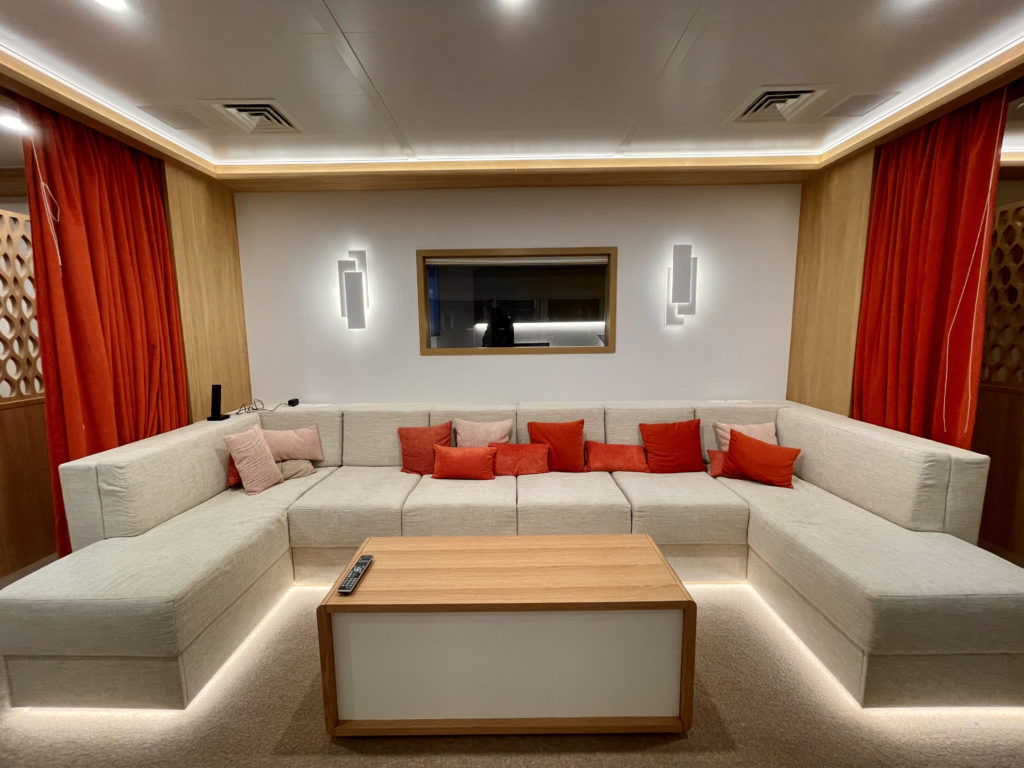 The boat will take charge of transporting not only additional fuel and provisions for the mother ship, but also all the equipment needed by the fortunate passengers on the yacht for a complete range of land, sea and air experiences (a helicopter, smaller boats, quads, jet-skis, scuba diving equipment and even a court for playing pickleball (a form of paddleball). 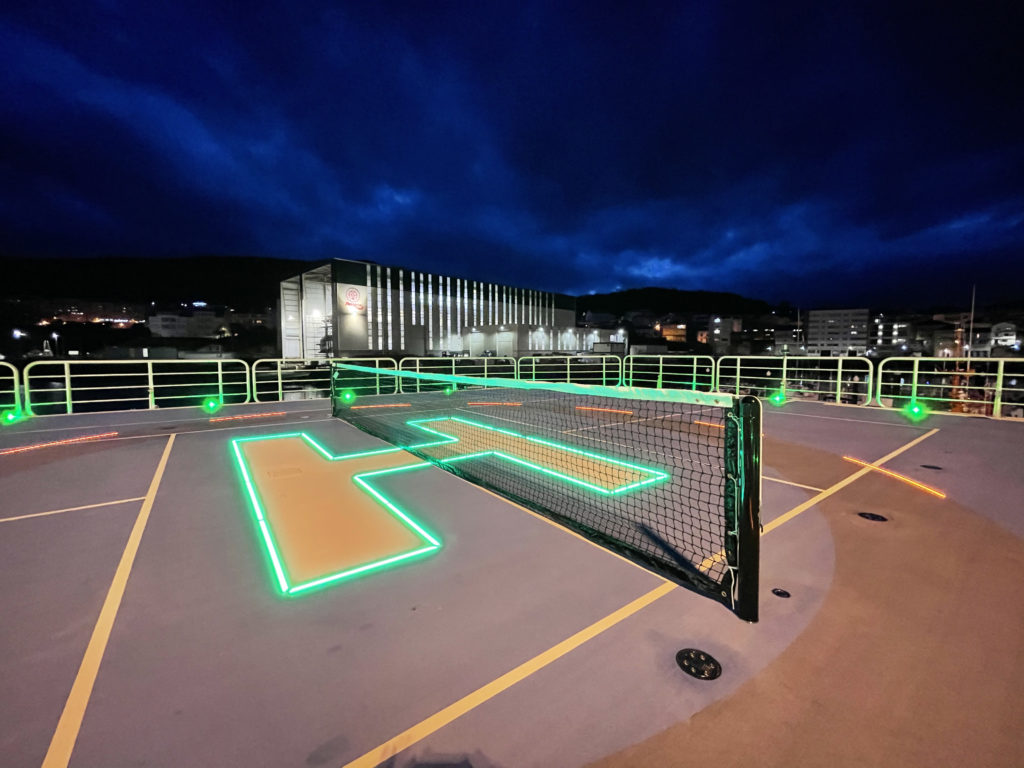 Oliver Design took charge of interior design and outfitting of more than 1,000 square meters of interiors on the “Wayfinder”. The work, which took over a year, was completed in March of this year. The vessel has a total capacity of 44 (18 own crew and 14 from the mother ship, plus 12 spaces for guests), and the work by the Spanish firm includes a wide range of spaces: bridge, engine control room, cabins, workshops, stores, infirmary, offices, laundry, galley, food stores, messes, diving room with decompression chamber, disembarkation area, gym, lounges, etc. Interior outfitting was completed in March, and the ship left Vigo in late April bound for Fort Lauderdale in Florida (USA). 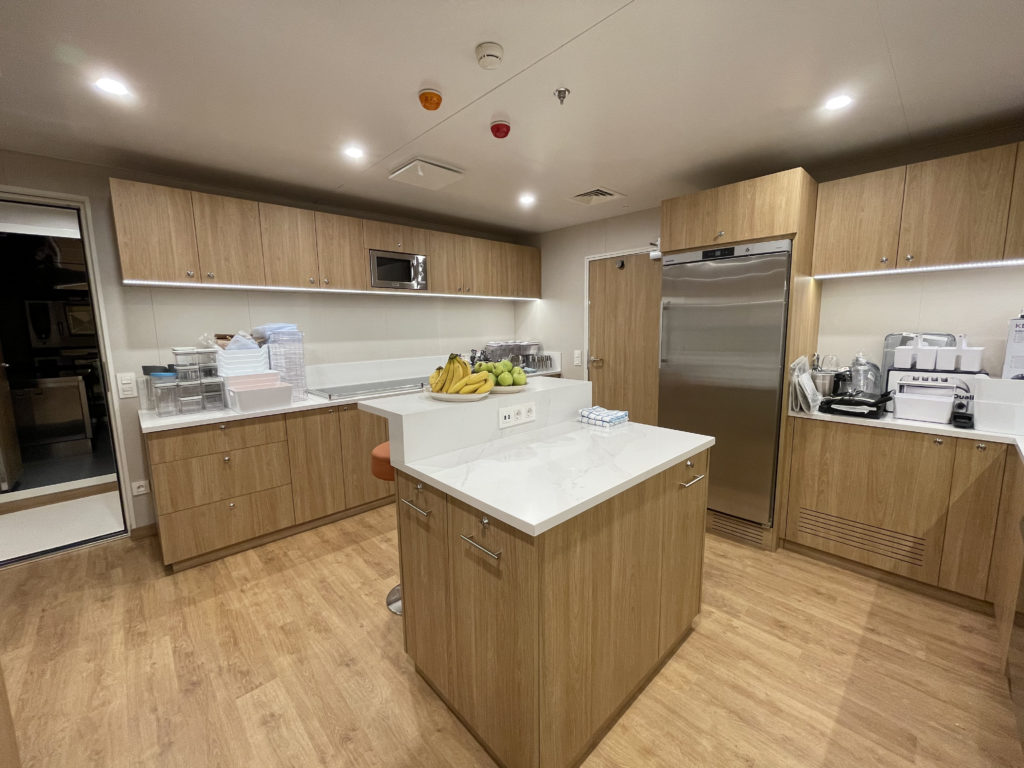 The third major project to be completed by Oliver Design in the first quarter of 2021 was a RoPax ferry (to carry passengers and freight vehicles), which has now gone into in operation in French Polynesia. The “Terevau Piti”, is 78 meters long by 17 meters in the beam, and is designed to accommodate 700 passengers, as well as having 500 lane meters of space for freight vehicles. Commissioned by SNGV 2 Moorea, a ferry operator based in Papeete, it will substantially enhance the company’s potential to carry tourists and goods between Tahiti and other islands in the archipelago, including Bora Bora. 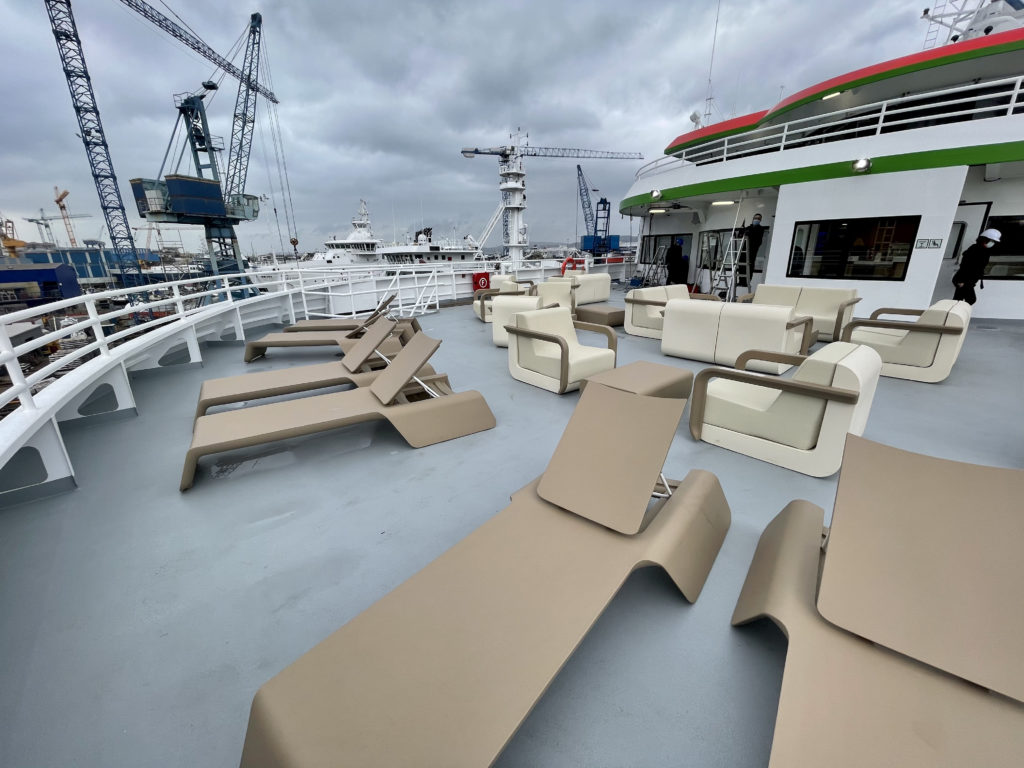 The ferry was built on the slipways at Astilleros Armón in Vigo. Oliver Design took charge of designing and outfitting out the 2,000 square metres of interiors and exterior terraces for passengers and crew. The work took nine months to complete, concluding in March 2021, and included outfitting work on four decks: the engine control room, changing room, workshops, laundry, and six twin cabins on the lower deck; the bridge on the upper deck; and on the two intermediary decks, the passenger access areas and aft lounge with a 150-seat terrace, plus four officers’ cabins, crew’s mess, VIP lounge with bar and terrace and two cabins, as well as another 190-seater passenger terrace. The work by the Spanish naval design firm features maximum passenger comfort and a local design style. 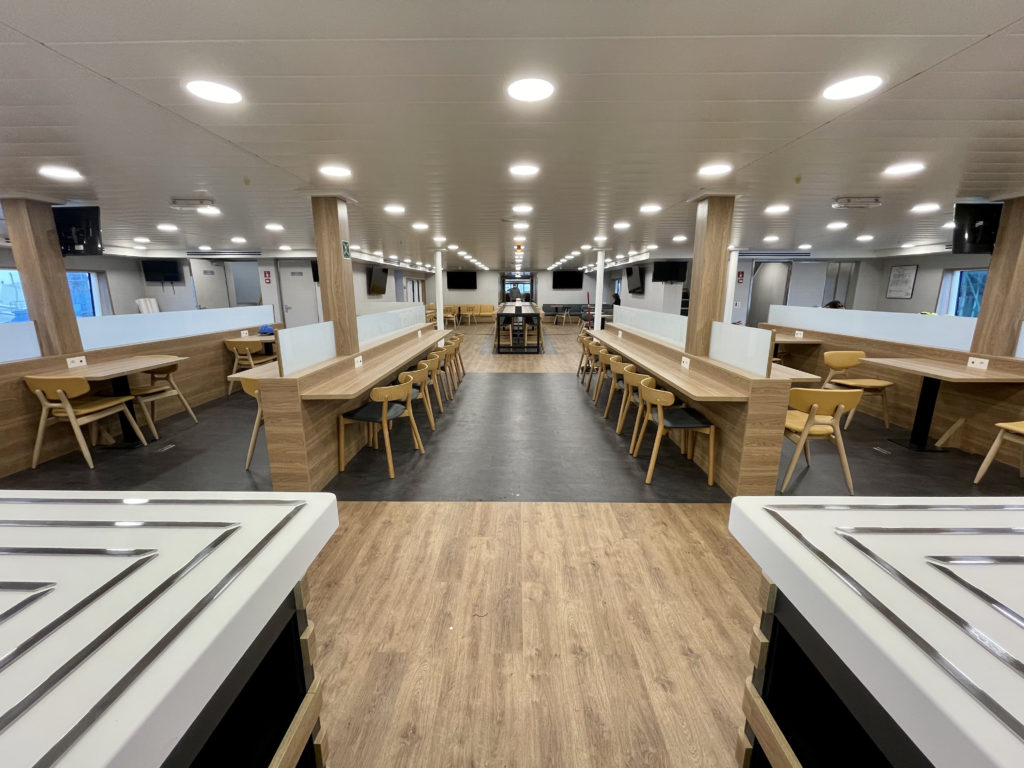 The fourth and final contract delivered by Oliver Design during the first quarter of the year forms part of an innovative new sustainable project: the “Eleanor Roosevelt”, a new Baleària ferry which is now in service on the route between Denia (Alicante) and the Balearic ports of Ibiza and Palma de Mallorca. It is the world’s first fast ferry to be powered by natural gas engines, substantially reducing emissions of pollutants and greenhouse gases. With a catamaran hull built entirely in aluminium, the large vessel (123 meters long by 28 meters in the beam), can accommodate 1,200 passengers and 1,900 lane metres of freight vehicles. 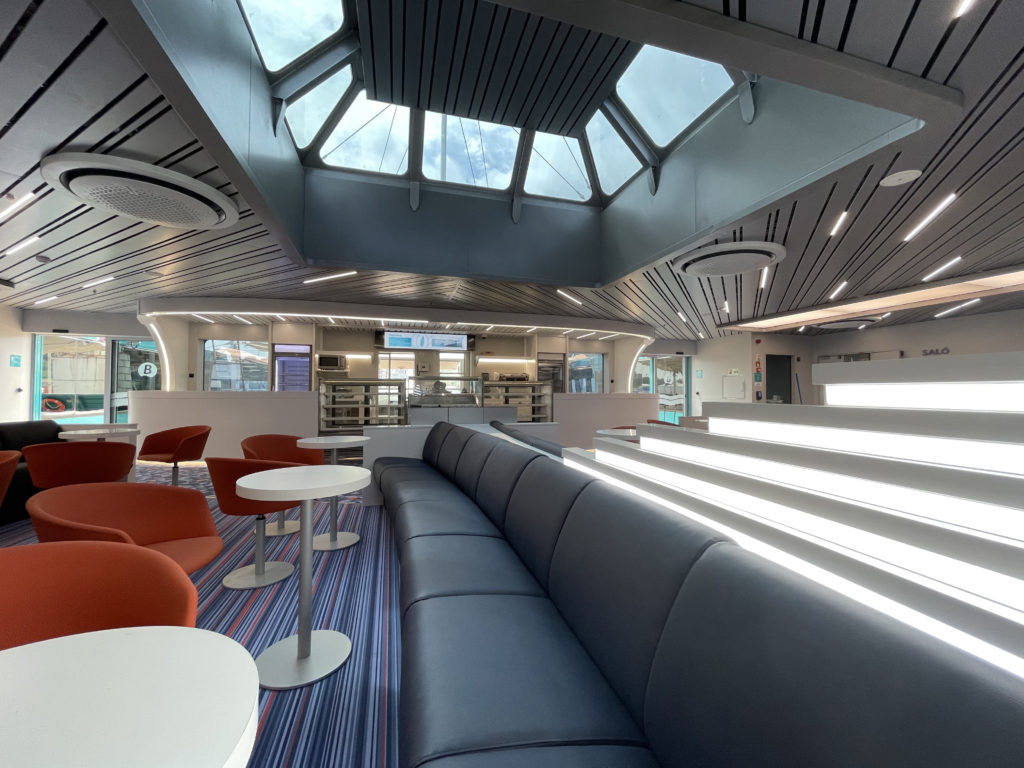 Oliver Design’s contribution consisted of designing and fitting out more than 2,200 square metres of interiors. The work was completed in just nine months –from July 2020 to March 2021– at Astilleros Armón in Gijón. The contract also extended to the main crew and passenger quarters: bridge, office, laundry, lounge and cabins for the crew; and for passengers, a reception area, three large lounges (seating 310, 600 and 290 people respectively) a VIP lounge, self-service canteen, crèche and a large terracewith a bar and a fibreglass replica of a gastro-van. 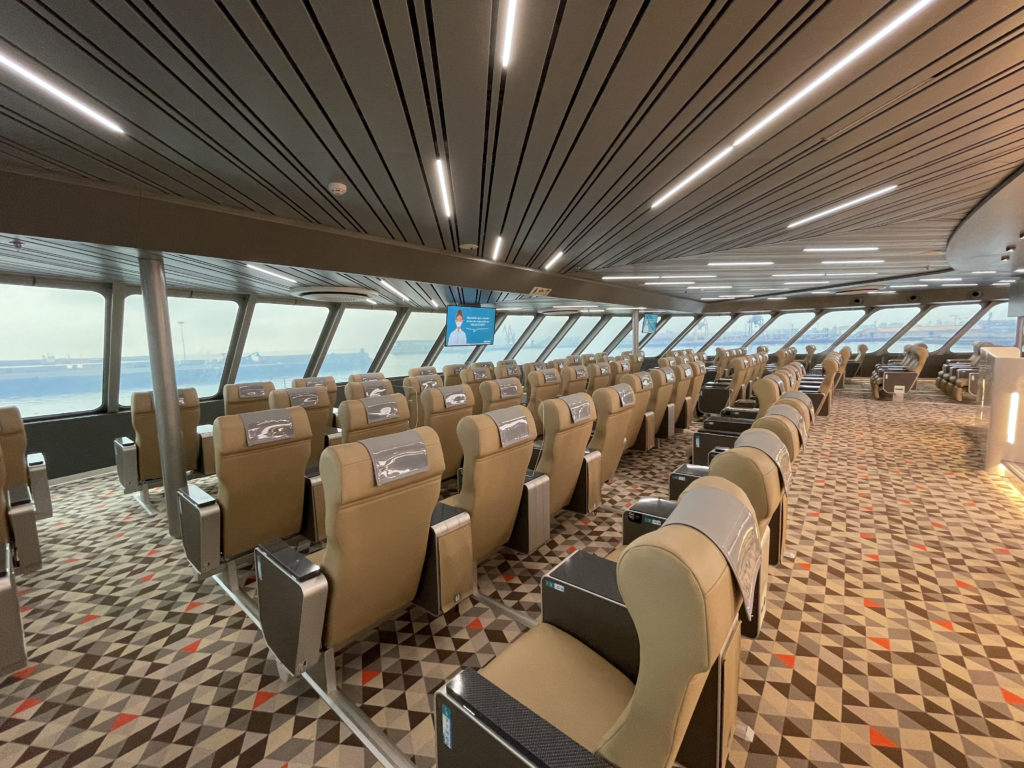 Following an intense first quarter, OLIVER DESIGN is now facing into the rest of the year with good prospects, despite the prevailing uncertainty. As CEO Iñigo Oliver notes: “Right now, most shipowners are on stand-by, waiting to see how the pandemic pans out. In our specific case, we are confident that we can complete our order book with a major project before the end of the year”.