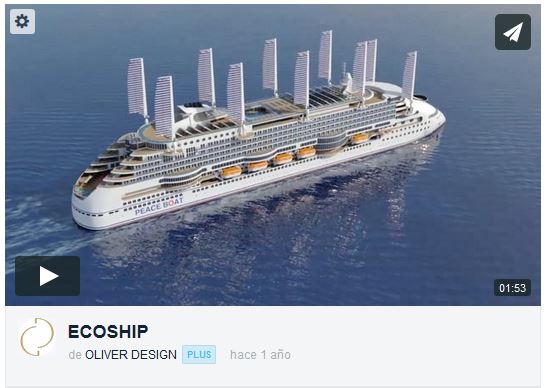 29 July 2017.- The Ecoship cruise liner is a revolutionary new ship which will feature all the latest innovations in renewable energy use. It is destined to become a benchmark for sustainability in maritime transport and is being designed in Spain. Specialist naval design and architecture firm Oliver Design, working from Getxo (Spain), has been commissioned to design the ship by Peace Boat. This Japanese NGO, nominated for the 2008 Nobel Peace Prize, is the promoter behind this ambitious project to design and build a high-range eco-friendly cruise ship.

The Spanish firm has been working on the project since 2012 and has now completed the full architectural design of the ship, from the first sketches to the plan with the general layout of the vessel, including details of cabins and public areas, external 3D view, videos and other projection and display features. For this pioneering project, Oliver Design is working in collaboration with a world-class team of experts, including prominent engineers, scientists and thinkers from the fields of eco-technology and shipbuilding. The work is being coordinated by Peace Boat’s project manager, naval engineer Dr Andrés Molina, who has long experience in the cruise ship sector.

In May, Peace Boat signed an agreement of intent with Finnish shipyard Arctech Helsinki Shipyard Inc., a major milestone in the development of the project. The aim is for the ship to be delivered to the Japanese NGO in time for the 2020 Olympic Games in Tokyo.

The Ecoship will be an ocean liner with a GRT (gross register tonnage) of 60,000 tonnes, capable of housing 2,000 passengers in 750 cabins. It will be 250 metres long with a beam of 32 metres and a draft of 8 metres. It will have a maximum speed of 21 knots and a cruising speed of 17 knots.

This project is unique in the world; this is the first time that the most advanced energy technologies will be incorporated on a large-tonnage ship rather than on experimental vessels, as in previous projects. Sea transport is now one of the leading contributors to greenhouse gas emissions and one of the Ecoship’s aims is to show ship owners and builders that more sustainable vessels are possible.

Design of this revolutionary cruiser includes 10 large retractable elements made up of solar panels, which can operate as large sails in suitable wind conditions. For preliminary design of this distinctive feature, Oliver Design worked with German naval engineer Detlev Loell, who brought his expertise to the project as an internationally renowned expert on classic sailing ships.

The revolutionary sails can be used for propulsion and at the same time to generate power. The Ecoship is designed to include a total of 6,000 square metres of solar panels with an output of 750 kW.

As well as harnessing renewable energy sources, the ship will have a hybrid engine, capable of being powered by diesel or liquefied natural gas. This will save up to 20% in fuel consumption and reduce carbon emissions by up to 40%, compared to a similar ship with conventional technology. The Ecoship will also have all the latest advances in waste disposal and architectural design features based on the biophilia concept. Biophilia is a building concept that advocates maximum use of natural elements such as air, light and water, as well as materials and designs based on nature itself

Oliver Design first made contact with Peace Boat in October 2012 at the International Cruise Summit in Madrid, where Jaime Oliver —founder and CEO of the Spanish firm— first learned of the NGO’s interest in finding a designer for its project. A few weeks later, a whale stranded on a beach in his native Basque Country gave Oliver the inspiration he needed for the first outline sketch.

From this initial idea, Oliver Design developed the preliminary version of the plans for the Ecoship. Yoshioka Tatsuya, founder and director of Peace Boat, subsequently visited Oliver Design’s head offices, and an agreement was signed awarding the Spanish company an exclusive commission for the architectural design of the Ecoship.

Over the last a year and a half, the project has had an enthusiastic reception at a number of global forums on the environment and sustainability, including the Twenty-First International Conference on Climate Change held in Paris in December 2015, the World Future Energy Summit in Abu Dhabi in January 2016 and the TED2017 Conference in Vancouver in April. It was first presented to the cruise industry at Seatrade Cruise Global 2016, in Fort Lauderdale (Florida, USA).

Working for Peace, Human Rights and the Environment since 1983

Peace Boat, the Japanese NGO promoting this revolutionary cruiser, has been working since 1983 to promote peace, human rights, the environment and sustainable development, organising educational voyages throughout the world. To date it has staged over 90 voyages, visiting around 100 ports in 80 countries with over 70,000 participants.

The name, Peace Boat, accurately reflects the organisation’s approach, offering educational travel on large passenger ships with opportunities to share experiences on board and contact audiences from countries around the globe. It aims to develop partnership programmes while at the same time promoting responsible tourism.

The organization wants the Ecoship to be a turning point for the shipping industry and a flagship for raising awareness on climate change. As well as hosting Peace Boat’s voyages throughout the world, the ship will be used to stage exhibitions on green technology at the 100 ports where it is expected to dock each year. It will also act as a floating laboratory, contributing to research on the ocean, climate and eco-technologies. The ship will contribute to raising awareness and promoting an active commitment to the challenges of sustainable development.