TO SHOWCASE LATEST PROJECTS AT ITS STAND AT NAVALIA 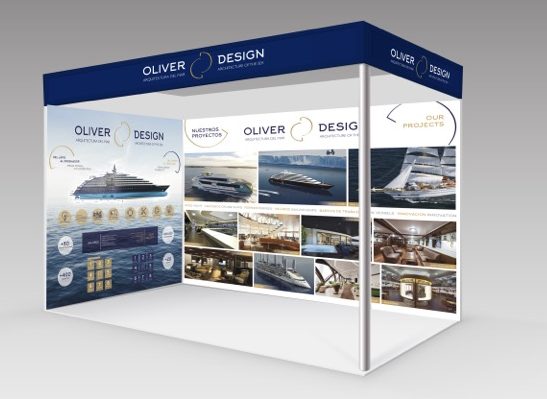 OLIVER DESIGN has completed the architectural and exterior design for the ground-breaking discovery yacht, “Scenic Eclipse”, due to come into operation in August and is now working on a second even more exclusive ship for the same company

OLIVER DESIGN will be showcasing some of its latest projects on its stand at the Navalia trade fair, which runs from 22 to 24 May in Vigo (Spain). Recent projects from the Spanish firm, which specialises in naval design and architecture, include new state-of the-art vessels ranging from working vessels to luxury cruise ships. It has also carried out renovation on several existing vessels. 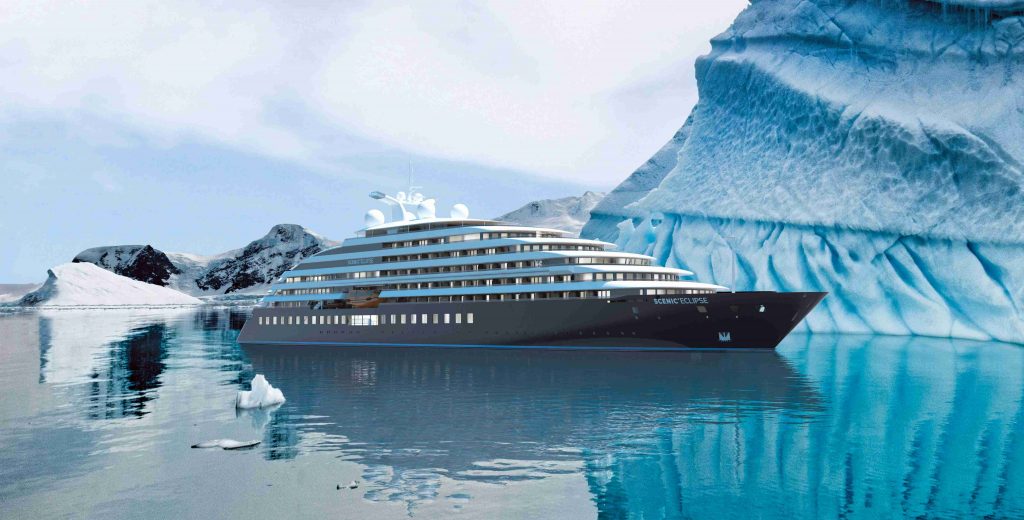 Recreation of the “Scenic Eclipse” on a polar cruise.

The biannual Navalia is one of the top international fairs for the shipbuilding industry. Nearly 25,000 delegates from around the world will have a chance to see some of the latest innovations, network and close business deals. OLIVER DESIGNis a regular attendee at the event where it has its own stand. This year, it will be showcasing nearly thirty years’ experience in designing and fitting out all kinds of ships, with examples of some of the firm’s most recent work and output from its R&D department.

One of the firm’s most recent commissions involved designing the “Scenic Eclipse”, the world’s first luxury discovery cruise ship, which must surely rank as one of the most remarkable ship designs of 2018. Launched on 31 January, the maiden voyage is scheduled for late August. This is a pioneering project, offering passengers top-of-the-market tourist facilities and a chance to explore virgin spaces and extreme environments. Among other destinations, guests will have a chance to travel to the Arctic and Antarctic, as well as journeying to the bottom of the ocean. The ship carries its own helicopter, a small submarine and several zodiacs. It can cater to up to 228 passengers in 114 luxury suites and includes all the latest innovations in naval design and technology.

Even before the Scenic Eclipse’s debut voyage, the Australian cruise operator has already announced plans to commission a sister ship to Uljanik shipyard.

As proof of OLIVER DESIGN‘s versatility, it is currently working on a number of projects in an entirely different sector — ships for the fishing industry. The firm recently signed a contract for turnkey design and fitting-out of a tuna ship to be built in the Zamakona Shipyards at Bilbao Port in northern Spain. The “Campolibre Alai”, a freezer ship featuring all the latest technology, is bound for the fisheries of the Indian Ocean.

OLIVER DESIGNis also working on turnkey interior fitting-out of the “Norwegian Gannet”, having already completed the design for the interiors, including some unusual features. The ship combines a high-quality work area, double and single crew cabins, a spacious dining room, lounges, changing rooms, a gym with sauna, and a cinema, which can double as a meeting hall. The B deck also contains an impeccably decorated conference room, complete with a bar and recreation area for the crew, which can be used as a reception area for potential clients and distributors. The contract also covers fitting-out of the bridge and part of the fish processing facilities.

The innovations in design, capacity and energy efficiency will make the vessel a trend-setter for other factory-ships. Once delivered, the owners have the option of commissioning a second vessel of the same characteristics, to operate in the same North Sea salmon fish farms. 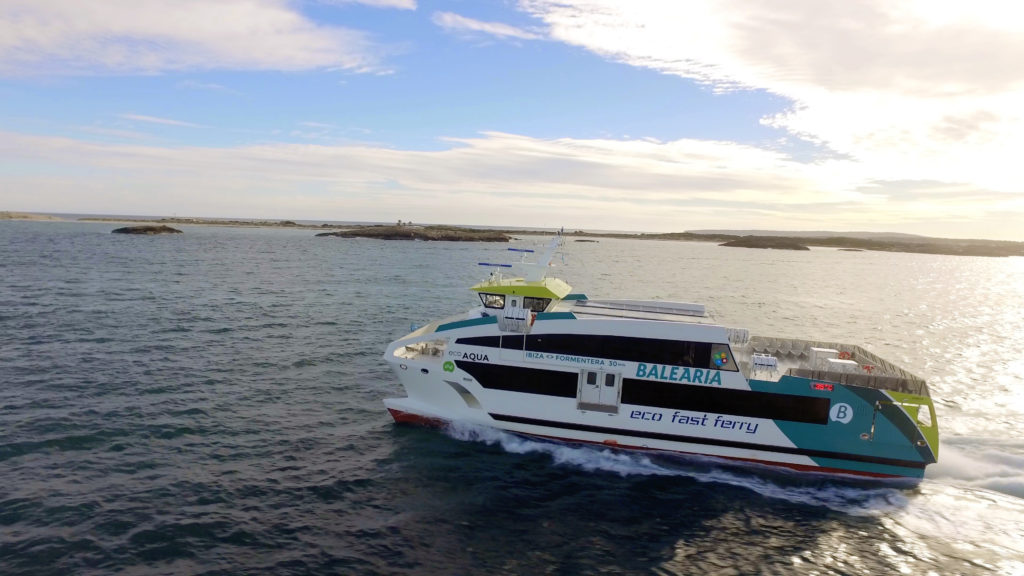 After winning a design competition, OLIVER DESIGNrecently carried out the architectural design for four Eco Fast Ferriesfor Baleària, the leading Spanish passenger and freight transporter between Mediterranean ports. The first of the four units has already begun service on the Ibiza-Formentera line. With a maximum speed of 28 knots and capacity for 350 passengers, the ship boasts innovating design, eco-efficiency and latest-generation materials. It was short-listed by NSAIDS (the Spanish Association of Naval Engineers) for the 2017 Outstanding Vessel award.

In 2017, Oliver Design also delivered the turnkey project for twin high-speed catamarans to service oil rigs off the Angolan coast. The work included interior architecture of the main decks, bridge and the two hulls housing passengers and crew. The two 57-metre catamarans are made in aluminium and have a beam of 12 metres. Key considerations for selecting the materials, furniture and surface treatment include noise reduction and the weight restrictions for this type of vessel. This vessel is one of the candidates for the Best ship of the year at www.ingenierosnavales.com

Another recent contract involved renovating four ships for the Spanish firm Trasmediterránea: the “Superfast Galicia” (now renamed the “Ciudad de Ibiza”), the “Juan J. Sister”, the “Fortuny” and the “Sorolla”. The turnkey renovation and rehabilitation project posed an interesting logistical challenge, since the work had to be carried out while the ships were in operation. In the case of the “Ciudad de Ibiza”, the vessel had to be completely remodelled and modernised, including fitting-out over 1,000 square metres of interior areas. The entire job was completed in a record time of just 20 days during a transatlantic run, requiring complex coordination of different tasks. 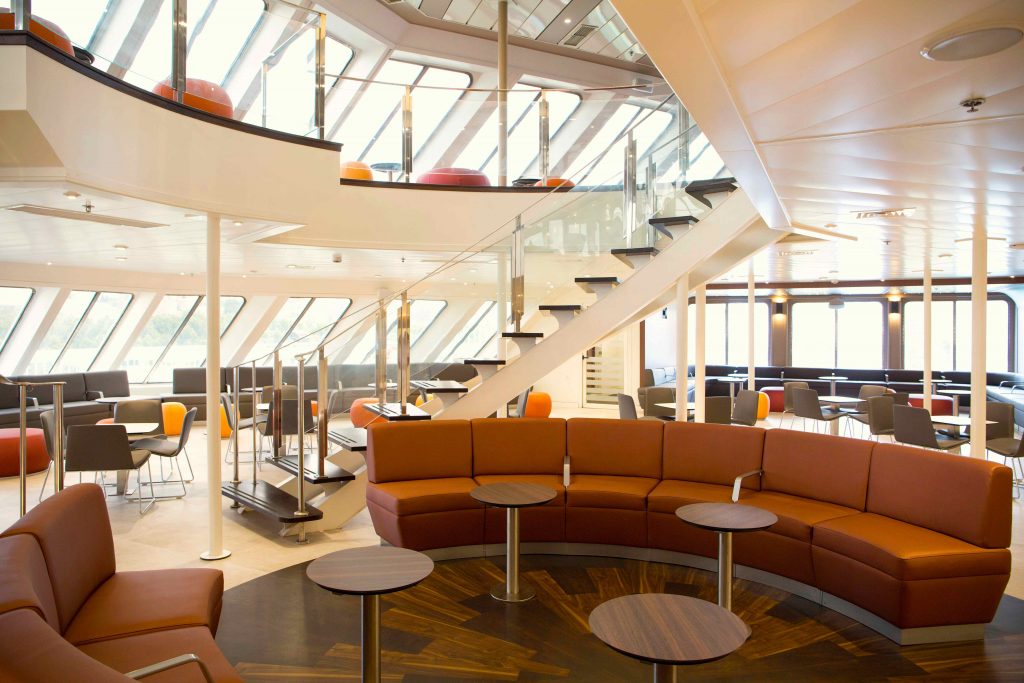 In the case of the “Fortuny” and the “Sorolla”, which service Trasmediterránea’s Melilla-Malaga and Melilla-Almería routes respectively, the improvements consisted of complete renovation of cabins, fitting-out of a new lounge and bar at the stern, and a “food-lounge” catering to a wide variety of tastes. The work also included remodelling the on-board shop and providing a new children’s zone.

As well as working under contract on specific projects for shipyards and ship owners from around the world, OLIVER DESIGN’s R&D department also develops its own innovation projects. These include initiatives linking shipbuilding technology to recreational activities, with some stunning and innovating designs tailored to individual locations. Projects include floating theme parks and onshore structures shaped like ships to house a wide variety of activities, including restaurants, sport and cultural venues, shopping areas, night-time activities, water parks, spas and aquariums.