Spanish naval design and architecture firm, Oliver Design, has just completed interior design of the “Norwegian Gannet”, an innovating salmon factory vessel. The ship is currently under construction at the Balenciaga yards near San Sebastian (Spain). Oliver Design will shortly begin the work of interior outfitting on the ship, which is due to be launched in April and handed over to the owner in August. Although the shipyard was founded in 1921 and the naval design firm in 1990, this is the first time the two leading Basque firms have worked together.

The “Norwegian Gannet” is a whole new concept in fish factory ships and boasts some very special features. With improved and more efficient designs, it will cut operating costs and minimise environmental impact. Norwegian company Hav Line Gruppen has developed a vessel capable of processing and freezing salmon harvested from pens on the west coast of Norway and transporting it to the Danish port of Hirtshals, where it will be sorted and packed. The result is a substantial reduction in time-to-market and carbon footprint.

The 94-metre “Norwegian Gannet” will have an 18-metre beam and a GRT of 4,000 tonnes. With a crew of 53, it will be capable of carrying and processing 1,000 tonnes of salmon per trip. Each delivery will take the place of around 50 container trucks. In addition, the vessel will be fitted with the world’s first hybrid battery-supported diesel propulsion system, manufactured by Finnish company Wärtsilä, substantially reducing the overall emissions of the process.

The salmon processed on board the “Norwegian Gannet” will mostly be sold on Asian markets.

The factory ship is being built by Balenciaga, which has entrusted Oliver Design with the turnkey design and outfitting of the vessel’s interiors, including some unusual features. As you might expect of a Norwegian vessel, it’s being designed to be a first-rate workplace. The crew will enjoy double and single cabins, a spacious mess area, lounges, changing rooms, a gym (with sauna) and a cinema which can double as a meeting room.

The B deck also contains an impeccably decorated conference room, complete with bar and recreation area for the crew, which can also be used as a reception area for potential clients and distributors.

As well as the crew’s living areas, Oliver Design will fit out the bridge and some of the fish processing facilities: high-quality insulation and cladding for fish storage and processing areas and fish bins. Proper insulation –thermal, acoustic and anti-vibration– will be a top priority in the project which involves fitting out nearly 2,000 square metres of floor space across five decks, including all the necessary services: machine and control room, workshop, galley, laundry, infirmary, office and the disinfection zone adjoining the processing plant. All facilities will be designed for the extreme weather conditions typical of the North Sea, where the “Norwegian Gannet” will operate.

The first collaboration project between Oliver Design and Balenciaga Shipyards is set to become an international benchmark in the factory ship sector, with major innovations in design, capacity and energy efficiency. Once delivered, the owners have the option of commissioning a second vessel of the same characteristics, to operate in the same North Sea salmon fish farms. 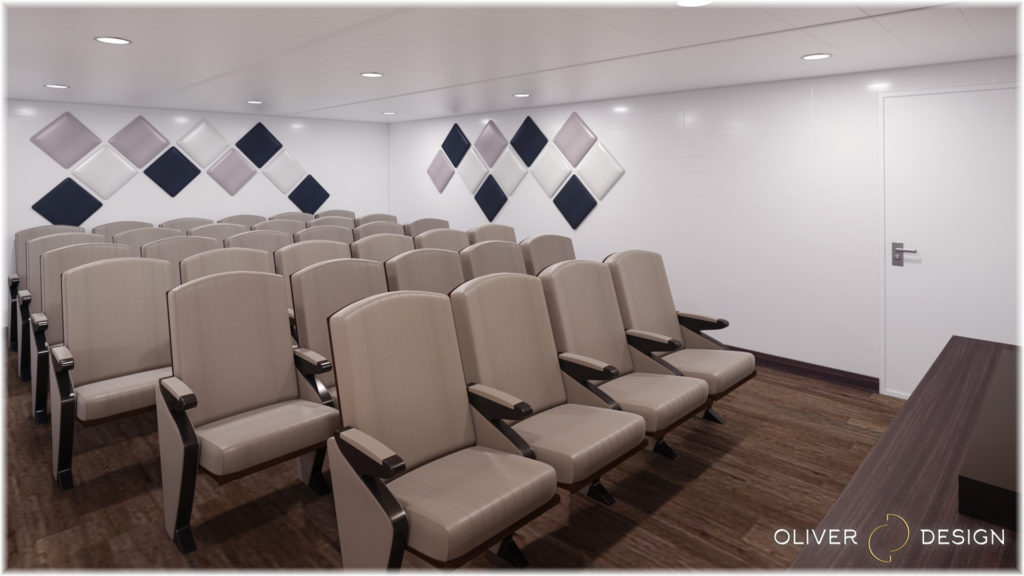